Posted in the News Category

The Oxford Welsh Male Voice Choir held their 90th Anniversary Concert in St Augustine’s Church on Saturday 29th September 2018 where they were joined by Risca Male Choir. The church was full with families, friends, supporters and those who had come just to hear a superb concert, including the Penarth Town Mayor, Cllr Jon Luxton.

The Oxford Welsh Male Voice Choir was formed after unemployed miners from South Wales walked to Oxford during the Depression to find work at the Cowley motor works in Oxford.  Once there they formed a male voice choir which is still going strong. To commemorate the walk, some members of the choir cycled from Oxford to Penarth. Many of the men involved came from Risca, and the coal the former miners had produced was shipped around the world from Penarth Dock, at one time one of the most important coal exporting ports.

OWMVC started the evening with four songs starting with ‘Rachie’ and then a Maori song ‘Pokarekare Ana’ followed by ‘Let all men sing’ and ‘If we only have love’. They were followed by Risca Male Choir who sang four songs – ‘Gloria’, ‘The seal lullaby’, ‘Sure on this shining night’ and ‘Goin’ up yonder’. The two choirs joined together for ‘Myfanwy’ by Joseph Parry (who is buried in St Augustine’s churchyard) and ‘O Gymru!’

After an interval Risca started the second half of the programme with two songs commemorating the end of the First World War 100 years ago – ‘In Flanders Fields’ and ‘For the fallen’ before lightening the mood with ‘Gonna rise up singing’ and ‘Hiraeth’.

OWMVC then sang a spirited ‘Men of Harlech’ followed by ‘Fields of Athenry’ and a rousing version of ‘Alexander’s Ragtime Band’ before finishing with ‘Cyfri’r Geifr’ which required some audience participation.

The combined choirs sang ‘Anfonaf Angel’ and ‘Morte Criste’, perhaps better known to most of us as ‘When I survey the wondrous Cross’.

The choirs, their musical directors Helen Swift and Tomos Gwyn and the accompanists were thanked by Cathy Grove, Chair of the Friends of St Augustine’s. They then sang the Welsh National Anthem to round off the evening.

This was a wonderful evening and thanks are due to David Reid, a member of OWMVC and former member of the congregation at St Augustine’s before, as Cathy put it “emigrating to Oxford” for suggesting this and making it happen. 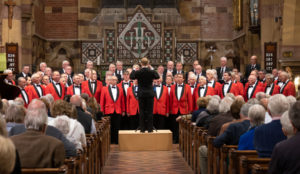 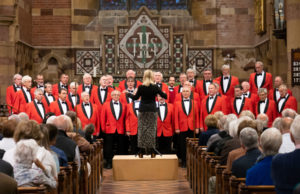 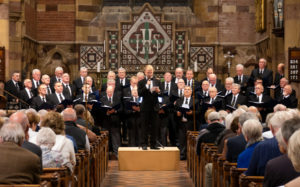 Sorry, comments are closed on this item.